Want to know the six things I’m doing to assist me on becoming a polyglot? Keep reading. 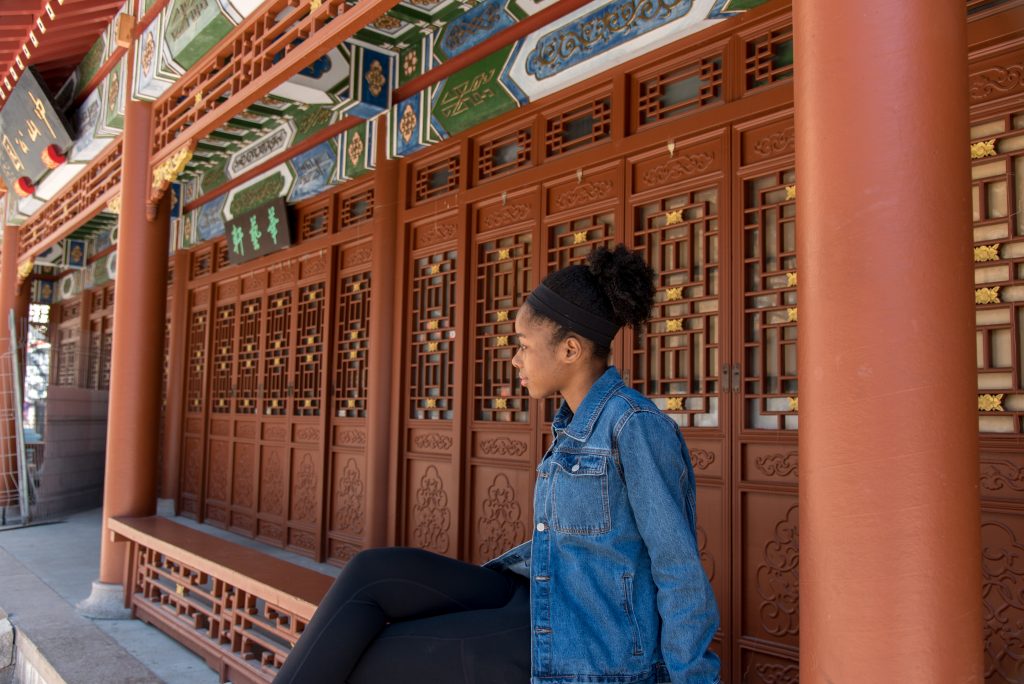 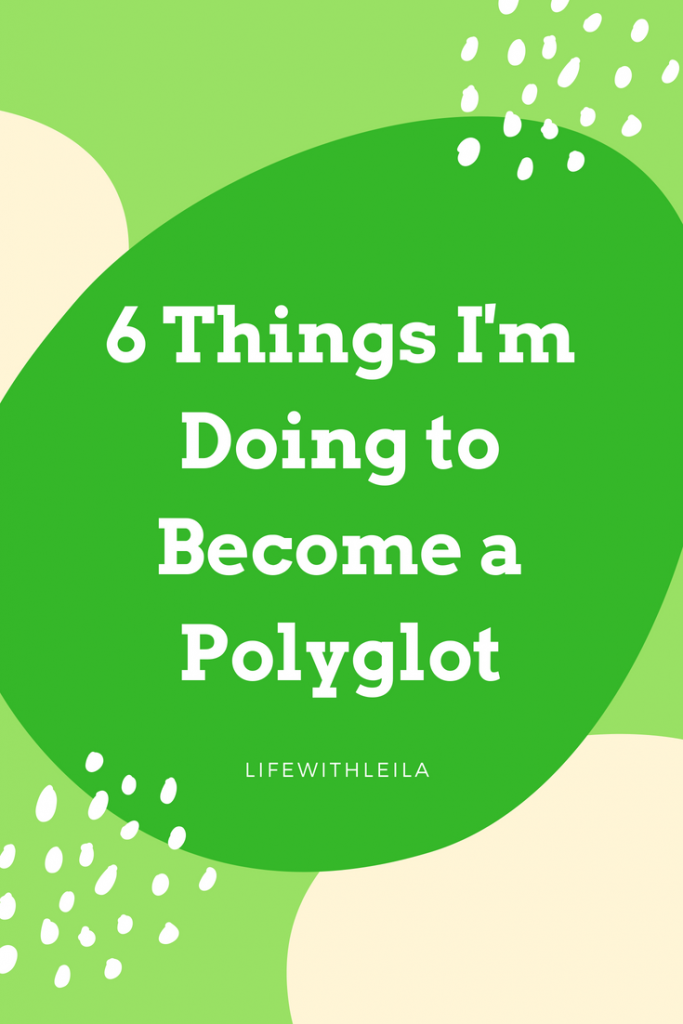 Just kidding! Well, I’ll be honest, in certain languages I’m not too far off. But that’s going to change because I am finally becoming serious about learning new langugaes. I know I’m not the only one who has been fascinated with other languages and cultures besides my own. Hence, why I have this unsatiable desire to travel the world. But I waant to be able to converse wiith locals when I travel to many of the places I go to. I don’t want to stickto solely tourist-y areas where I can find someone who speaks English. As a native English speaker I am privileged enough that pretty much wherever I go I can find someone who speaks some English. But what fun is that?

A polyglot is someone who knows or uses several languages. Here’s the good news, we’re all already on the journey to become polyglots because it starts with knowing just one language. I mean, you can’t know or use multiple languages if you don’t start with one, right? So now we just have to work on becoming bilingual, then working on that third, fourth, fifth, etc…

My First Time Studying a Language.

I started studying Spanish in middle school and I always liked it, done well and if I do say so myself, it came natural to me. Not to say I was anywhere near fluent or native sounding, but I didn’t have the classic American accent that plagued many of my classmates. However, if others have grown up with the American language teaching system, you know it’s not that great. I mean, how many people can you name who have taken 4+ years of Spanish and their vocabulary doesn’t go much beyond, ¿Donde está la biblioteca? So while I did well in Spanish, my skills improved more when I studied in my free time, which wasn’t a WHOLE lot. I also studied Spanish in college as my minor. My Spanish teacher one year even suggested that he thinks I should consider making it my major #humblebrag. But it’s now been over two years since my last Spanish class and I forgot a lot of grammar rules and my vocabulary I feel is stagnant.

But instead of rolling over and calling it quits, I am now set on improving my Spanish (speaking, listening, writing) skills as well as learn more languages. It’s tough, but not impossible. Don’t believe me? Head on over to Youtube. There are many polyglots in this world, and I plan to be one of them. I am currently working on my Spanish skills and at first wanted to learn Portuguese (Brazilian) but I heard it’s not recommended to learn two similar languages at once (they’re both romance languages, by the way). So instead I’m thinking of starting Russian. Yes, I want to speak Russian. Unlike Portuguese, I have no real base to go from in Russian. I knew how to say two things, no and thank you. But with the amount of free resources I have, I can now say a few more words and I am working on the alphabet.

SOOOO, here are a few things I am doing to help me on this exciting polyglot journey.

This may be an obvious one, but I intend to treat this like a class. I am someone who likes structure, so this isn’t too hard for me. However, I think this can be useful for everyone because you won’t be able to use excuses like you “didn’t have enough time” because it’s already factored into your day. Treat it like a class, you know everyday from 10:30 to 11:45 you have to be in Chemistry. So set out a block of time to study a language. It can be for however long you feel is necessary and useful, but I recommend at least an hour per day. One thing I am trying to figure out is whether I want to study both Spanish and Russian on the same day, or have let’s say 4 days dedicated to Spanish, and 3 to Russian. I am thinking the latter may be more beneficial.

2. Listen to the Language Constantly

One of my biggest challenges with Spanish these years has been my listening comprehension. I felt when I was in class I could read and understand the material and the professor (who obviously spoke at a slower rate than they would in actual conversation). I would get this false sense of being more advanced than I was. Then when I was out in the real world and heard people speaking Spanish, I couldn’t understand a thing. And when I listened to Spanish music, I could barely make out the words. So now I make it a priority to LISTEN to Spanish for an hour each day. Some days this counts as part of my studying (when I’m feeling lazy, to be honest) and other days this is in addition to studying for at least an hour.

I will listen to Youtubers (should I make a post of my favorite Spanish speaking youtubers that help me with my Spanish?), podcasts, TV shows, soccer games and interviews of people speaking Spanish. The internet is a great resource for those of us who don’t live in Spanish speaking countries who want to get exposed to the language. Netflix has Spanish audio for so many of its shows. I recommend watching with the subtitles on but in SPANISH (or whatever language) if you are above a beginner’s level. If you are intermediate/advanced, having the subtitles in English will make falling back to English and translating in your head (a big no-no that I’m still trying to unlearn) easier.

Ok, what? I admit, I don’t always do this because sometimes I just need a quick, concise answer that I understand in English. However, I was watching Youtube videos about learning Spanish and this guy suggested when you don’t know a word instead of Googling “what does ‘avergonzado’ mean in English,” Google, “que significa ‘avergonzado.'” This will make the results come up in Spanish and you will be able to explain what something means in the language you’re learning.

Maybe it’s because I am so used to being a student, but I like having books to use that teach me grammar rules, vocabulary and provide exercises. This won’t be a must for some because Youtube pretty much has videos on everything, but I have been on the search for good Spanish (and now Russian!) books. But unlike school, it won’t be necessary to buy $200+ books to get quality information. I have found many books on Amazon under $25 that I plan on getting little by little. #BudgetLife. I currently have Spanish for Dummies, Hide this French Book (I got at a bookstore in Montreal), a Portuguese Phrase Book & Dictionary and a Spanish-English dictionary. Still on the hunt fo a beginner’s Russian book.

This can go along with listening because I find myself getting inspired from those that I listen to. But it is easyh to get discouraged when learning a language. You’ll hear “why do you want to learn X language?” or that it would be easier if you were younger or that X is such a hard language so, good luck with that. But there are soooo many polyglots I’ve found online who taught themselves these languages as ADULTS. We don’t have to stop learning as we get older just because some people choose to. I feel like we should constantly be learning and challenging ourselves and one way I want to do that is by learning new languages. The other day I was out with my sister and heard people speaking Spanish and I understood a lot of what they were saying. I don’t think I could have a few months ago. That feeling of accomplishment when you can speak to someone in another language or understand them is amazing a great feeling of pride and achievement. You can experience that too if you put the work in.

Hope this could inspire you to start your polyglotism journey. I plan to continue documenting my experience. As this was just an introduction post, I’ll also share my level in X language, challenges, improvements, what I’m working on, etc. in future posts.